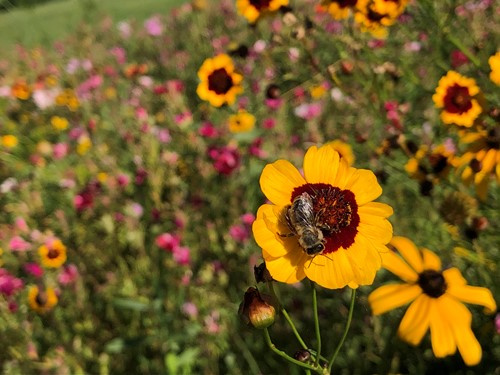 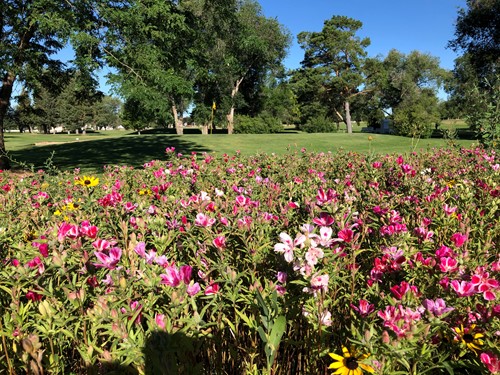 MOUNTAIN HOME, Idaho (Oct. 13, 2020) – Everyone knows plants need water, sunlight, and fertile soil to flourish, but there is an important element we often forget to include in the equation – pollinators. Pollinators like bees and the Monarch butterfly, Idaho’s official state insect, are integral to plant reproductive cycles, both in the wild and Idaho’s agricultural success.

"The City of Mountain Home recognizes the importance of these ecosystem drivers,” said Councilman Brad Stokes. “Our goal is to preserve and protect important insect species that occur naturally or are commercialized.”

In line with that goal, City staff have taken concrete steps toward implementing programs that help preserve and protect these important links in the ecological chain and the City Council has passed resolutions officially adopting pollinator protection policies.

Desert Canyon Golf Course Superintendent Jacob Olsen was the City’s trailblazer for local protection efforts. He began working through Operation Pollinator in 2016. Operation Pollinator, developed by the agricultural tech company Syngenta, provides golf course managers the tools and information to successfully establish and manage attractive wildflower resources that are crucial for bumblebees and pollinating insects, while enhancing the visual appearance of the course and the overall playing experience.

Olsen worked with Syngenta and Simplot to select plants and has established about 1000 square feet of wildflowers ideal for bee foraging at Desert Sage. Olsen took the project one step further and brought four honey bee colonies onto the course grounds, which are home to between 50,000 to 100,000 honey bees through the summer months. Randy Valley, a local beekeeper, has teamed up with Olsen to help address concerns and ensure the program stays on course

“The main reason I thought we needed bee hives on the golf course was because honey bees have been in rapid decline,” said Olsen. “I thought we could take a small part in helping with that. The golf course is well placed to establish and preserve habitats to help prevent further pollinator decline.”

According to a 2012 U.S. Department of Agriculture Report to the National Stakeholders Conference on Honey Bee Health, there were approximately 4 million honey bee colonies in the U.S. in 1970. By the time the report was published – at the height of the scientific community’s concern for the species – only about 2.5 million colonies remained.

The Environmental Protection Agency website notes that the first real indicators of the decline happened in the winter of 2006-2007 when beekeepers began to report unusually high losses of 30-90 percent of their hives. As many as half of them displayed symptoms not associated with any known causes of honey bee death. As the trend continued, it was eventually dubbed “Colony Collapse Disorder” (CCD) by scientists who studied the problem. Now the EPA says a variety of factors may contribute to CCD including crop pesticides, invasive mites, inadequate foraging opportunities, and stress placed on hives through certain management practices.

The USDA has since reported a slow but steady comeback, with the Jan. 1, 2020 official count at 2.98 million. Supporting the continuation of this comeback is important, not only for the bees themselves, but for humans, according to Stokes.

Prior to Stokes’ election to the City Council, he was a University of Idaho Extension Cropping Systems Educator.

In 2018, the City Council passed two resolutions that officially recognized the problem and adopted programs and policies that actively support pollinators and deter practices that may lead to CCD among local pollinator populations.

In 2019, the Council adopted a third pollinator-friendly resolution, this time aimed at protecting the Idaho state insect, the Monarch butterfly. The resolution:

“The benefits from Bee City USA, Monarch City USA, and our Pollinator Protection Resolutions are numerous," said Stokes. “This reminds the public that the local government body is concerned and realizes the importance of pollinators in the ecosystem. We hope other cities will follow Mountain Home’s example and consider taking these important steps toward the protection of Idaho’s beautiful lands.”