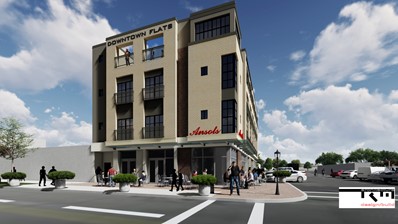 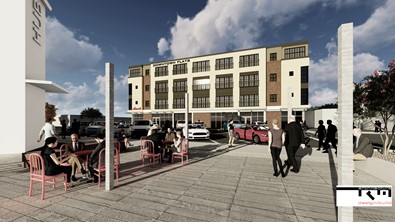 Editors Note: The following was written by Catie Clark for Idaho Business Review and was published on the IBR website June 23, 2021. The City of Mountain Home takes no credit for this content, except where information and artist renderings were supplied  to the reporter via press release.

The Mountain Home Urban Renewal Agency (MHURA) accepted a proposal at its June meeting from Weitz and Company of Boise for the Hub Building in the city’s historic downtown district.

What is the Hub Building?

The Hub Building is at the corner of corner of N. 2nd E. and E. 2nd N. Streets. Built in 1964, the 11,000-square-foot retail space, formerly occupied by the Hub of Mountain Home store, has been empty for most of the last decade. The building has a ceiling-to-floor wraparound glass store front on the two sides facing city streets. The interior has a basement, main floor and vintage mezzanine, a feature once popular in department store designs of the previous century. Multiple parts of the structure are now out of compliance with modern building codes, especially the safety hazard of the single stair access to the basement and mezzanine.

MHURA paid $275,000 for the Hub Building in August 2018. It issued an request for proposals to redevelop the property with a submission deadline of May 17, and a stated purpose for developers to propose “a viable use for the building.”

The winning Weitz and Company proposal includes the demolition of most of the building while saving many of the old structure’s “noteworthy building components for reuse in the new design,” according to an June 11 announcement by the City of Mountain Home about the project. The new 24,000-square foot energy-efficient building on the Hub site will be four stories, according to Dan Weitz, CEO of Weitz and Company. The building design, by Mountain Home architect Teran Mitchell of TKM Architecture will complement the nearby historic Mellan Hotel Building, which also fronts N. 2nd E. St. (old Highway US-30) at the south end of the same block as the Hub Building.

“The ground floor will have retail and restaurant space,” Weitz told the Idaho Business Review. “The second floor will be office space and the the top two floors will have flats.” Weitz, a lifelong Idahoan landowner in the Treasure Valley and Elmore County, is in discussions with an established Basque restaurant business in Oregon to open a traditional family-style-seating Basque restaurant in the first floor space of the new building. “I want to recognize the Basque heritage of Mountain Home in the tradition of the Turner House (an historic restaurant and hotel in the pioneer era) so I’d like to bring in a Basque restaurant that will draw people into the heart of Mountain Home.”

Weitz and Company is the private half of the public-private partnership behind the Mountain Home Rail Industrial Park, the only industrial park served by its own rail spur in Idaho. The rail spur is serviced by Union Pacific. Ownership of the four-mile rail spur on the south side of the tracks was transferred in October 2019 from the U.S. Air Force to the City of Mountain Home. The 400 acres of land for the park was annexed into the city in February 2020.

When asked why Weitz and Company submitted its proposal to the MHURA RFP, Weitz explained the the firm has a focus on the Mountain Home community: “We saw the Hub Building as an opportunity to reinvest money from the industrial rail park in the city…You can’t find a finer bunch of people to work with than the people at City Hall in Mountain Home.”